Faffing. It’s an official triathlon word that is used to describe the action that happens around a triathlon. Overthinking would be another word that would work well for this also.

For a triathlon, there is an enormous amount of “stuff” you need and the “kit lay” photo I will take on Saturday evening THIS WEEK, will probably need a wide zoom lens, possibly panoramic, to get it all in.  When I did the sprint triathlon last year, I wore a triathlon suit, which is like a long swimming costume that has a small chamois in it (which is the bike padding bit) that you wear for the swim, bike and run. But the distances required for the upcoming 113 triathlon render the, frankly laughably thin, chamois completely unusable for a 56 mile bike in particular and so I have spent more time stressing, faffing and overthinking the age old question of “what should I wear” to the triathlon, than for my wedding day. The professional triathletes seem to complete the whole thing in a swimming costume, but they have much less body fat than I do and their thighs don’t applaud them as they run along…so what to do?

As always, I turned to the professionals. Coach George Clack of https://bristolopenwater.co.uk/ had overheard a conversation I was having following one of the open water swimming lessons I have been having about wanting to do a practice tri (or Trytri) and offered to accompany me for the swim and the bike part of it. I accepted gladly and arrived as promised on the Wednesday afternoon.

It is very easy for faffing to take over when setting up your bike and transition area and George was very clear about not letting this rule your race. I racked my bike, got my bike and running shoes ready, socks unrolled and a towel and then got into my wetsuit. George is very calm and when you are freaking out internally, you need calm.

We got into the lake and waited to start. I am worried about the scrum that can happen at the beginning of an open water race but George put me at my ease. Let the racers go, count to 10 and then set off. Yes I’ll be behind them, but am I expecting to win the race? (I tried to keep a straight face) no, then setting off 10 seconds later to keep out of trouble, is worth the sacrifice. So I started my watch, waited 10 seconds and then swam off. I kept myself relaxed and got into a rhythm and before I knew it, I was out and running towards my bike, unzipping my wetsuit using a couple of tips that George had given me before we started.

At the bikes, I started to get a little frazzled. George’s mantra of calm, once again helped and I slowed myself down and looked at the task in hand. For a 56 mile bike ride, it’s important to be comfortable and so I was trying out putting on proper cycling shorts over my tri suit (for the extra padding) to see if this would work, and then taking them off again for the run. George’s philosophy again of taking a couple of extra minutes to ensure comfort would hopefully pay off and so before I knew it I was ready to start the bike section. Putting on shorts had taken an extra 20 seconds so after all that faffing, the difference in time for my transition was neglible.

The bike is always my favourite part and particularly so on a sunny day as this was. George coached me round offering advice on gears, seating positions, drafting and triathlon rules and as an experience triathlete and double ironman, he has plenty of real life examples and advice to share. 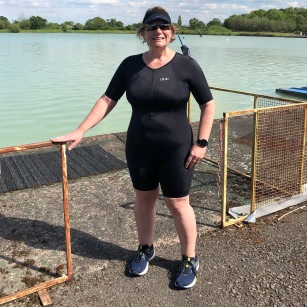 Before I knew it, we were back at the lake and I now had to complete the 5k run. George sensibly had ducked out of this part…can’t say as I blamed him…and I ran on my own. Immediately I knew I should have taken a drink with me and the training session was worth it for this alone as I will never do that again!

The afternoon was completely invaluable to me for many reasons. Mainly the confidence it gave me around transitions and the rules, but also the fact that it showed that bib shorts over a tri suit is a terrible idea and nappy cream was the only thing that seemed to soothe the problem.

George is available for one on one triathlon lessons and I fully recommend them. This is not an ad (just to be clear), just a general recommendation.

For comfort, the bike leg is the most perplexing part and important to get right. Over the past 4 weeks, since the last blog I have been on quite a few bike rides including a lovely morning over to Bath and a lovely cycle to Thornbury with some lovely Mummy Triathlon friends. Wearing cycle shorts is fine for pretty much any distance and so following the Trytri, I have decided to take a few extra seconds in transition and change into proper cycle shorts (under a very big over the head “toncho” towel) for the 113. This in turn means wearing a tri top and bikini bottoms for the swim under my wetsuit, so there isn’t too much faffing around changing in the first transition. I still wasn’t sure at this point what I would wear for the half marathon but I planned to test this.

Running as always is up and down and helpfully the weather has been hot too, which as you know, makes it harder for me, but none the less, I have been continuing to run. The problem is, that I seem to constantly go off too fast and so I seem to be dropping back into run/walk with alarming ease. I don’t have a problem with run/walk but I think in order to regulate my breathing for the race, slow but steady will be better. The other thing is that I can’t remember the last time I had a good run and this is worrying me. I’m tired and generally knackered. I’m worried about falling over again and this seems to consume every run I do. I also hadn’t managed to get a long run in and when training for a half marathon, this is always critical, but I kept putting it off because I was exhausted.

But sometimes life offers you a life line, whilst kicking you in the teeth at the same time. We’ve had some family stuff going on which has meant that apart from one run, I didn’t manage any training for a week. But this particular run was one I will never forget. I had planned to run 10 miles, but was in no emotional state to do it, but I’m a stubborn idiot (as I’m sure you’ve realised by now) so I set off. The first 2 miles were ok and then my mind took over and I started crying and I sobbed my way through miles 3 and 4 when I bumped into Smiley and her Mum. They are ladies I know through This Mum Runs. (Smiley is a London Marathoner who never stops smiling). They let me sob on them (actually, horrifyingly as I look back, I’m not sure they had any choice truth be told) and then insisted that they accompany me for the rest of the run. We managed 9 miles and I have never been more grateful to anyone in my life. I needed the run for so many reasons and without them, I am fairly sure that I would not have completed it. I’ve said it before and I’ll say it again, the running community is pretty awesome – thank you so much.

The week off training had helped me though and my legs once again felt like themselves. I felt, well not exactly rested as the week had been extremely stressful, but I was no longer “falling down” tired, as I had been for the previous weeks. The timing was good as last Saturday Merida and I went to the location of the 113 triathlon to practice and familiarise ourselves with the place (well me really, Merida completed an Olympic distance triathlon there a fortnight ago so she knows the place well). We swam in the lake (it’s nice, clear, there were shoals of tiny fish to be seen as I swam above them) and then we cycled one loop of the two loop bike course. We cycled with some members of the tri club and it was extremely enjoyable. The two ladies that joined Merida and I were lovely. Chatty, experienced, one training for Zurich ironman and both were very happy to impart their knowledge and experience to me. Now here’s the thing, the bike loop is flat. Completely flat. No hills at all. Now I know this can’t be viewed as a brilliant training opportunity for Weymouth 70.3 in September, but I don’t care. This was the confidence boost I have so sorely needed. I have been worried about the bike leg ever since the 100k uphill Tour de Bristol, but this should be fine.

Finally off the bike, Merida joined me for a 3k run around the lake, which importantly was in the shade. Hideous but manageable. I’ve done a lot of practice runs off the bike recently in preparation so I’m hoping I won’t fall over on jelly legs and embarrass myself in front of the more serious triathletes on Sunday.

So. I think I’m ready. Obviously, I could be better prepared for the run and I know the final 10k will be 100% mind over matter, but I’m confident that as long my ankle doesn’t go pop and I get enough food and liquid into my body on the bike section (I’m taking sandwiches and flapjack as well as technical nutrition stuff) I should get round.  Nutrition and hydration will be key and I still have 5 more days of faffing about that to go, but apart from this, I think I am ready.

I am mentally prepared for the fact that I will probably be last, but I am genuinely not bothered. Trundling as always will feature in the run and I’m wondering if I shouldn’t just change into my Trundler T shirt for the run leg? At least it might make me smile as I grit my teeth for the final hour. Plenty of time to faff about that over the next 5 days.

My wave starts at 6.10am on Sunday morning and I will start swimming 10 seconds after that. I hope to complete the 1.2 mile swim in around 50 minutes, the 56 mile bike in around 4 hours and then the 13 mile run is anyone’s guess. I’d be delighted with 3 hours for that, but have no expectations really. The goal is to finish and then enjoy the cold can of full fat Coke that has been promised to me by my daughters. I suspect that Merida and myself may indulge in some other fizzy type drinks later on in the day also, if all goes to plan.

My next blog post will hopefully be a post race analysis but I still have to that “20 minute easy run” to get through this week. My sister said to me yesterday “don’t fall down any holes this week”. Wise words indeed.

Couch to half ironman distance triathlon? Let’s find out. I’ve promised my daughters that I will do my very best and this is all I can do. Let’s hope it’s enough.

See you on the other side. 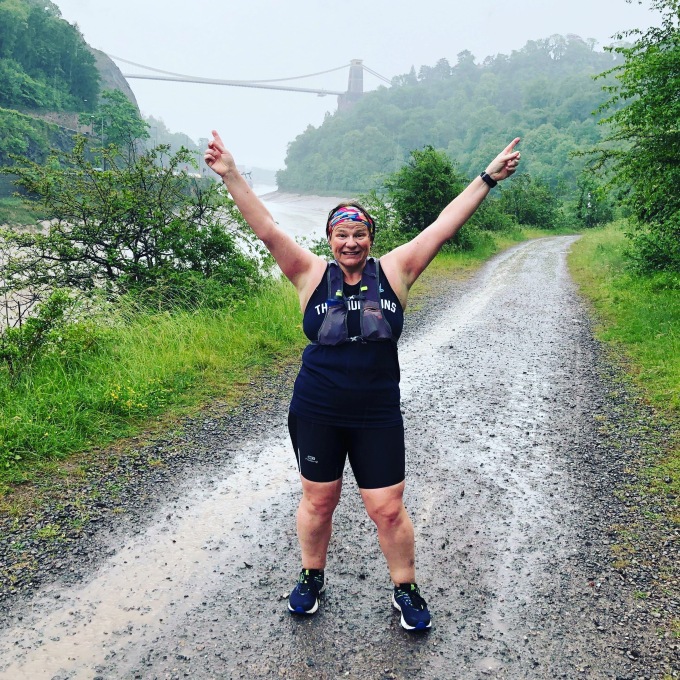 One thought on “The fourth discipline of triathlon is faffing…..”