Why is it so difficult in December to maintain a healthy approach to life?

Over the course of 2017, on average, I don’t really drink that much alcohol anymore – well not like I used to anyway. Those of you who have only got to know me more recently, won’t really be surprised by that statement, but those who have known me a long time, will probably be quite shocked, but it is true. I might have a bottle of beer on a Friday night and a couple of glasses of wine with Sunday lunch, but on the whole, I don’t really drink that much alcohol. I think that this coupled with all the running has definitely has made it easier to maintain the weight I originally lost when I originally decided to change my life in January 2016.

However, as much as I don’t really drink alcohol when I’m at home now, I definitely DO drink if I go out. But I don’t go out that much generally over the course of the year (sad but true). However, in December, I am out, (“Out Out”, if you’re a Mickey Flanagan fan) most of the month. I dread to think how many bottles of prosecco I have consumed since the 1st December. Actually, I don’t dread to think…I love it. All the dancing, eating, giggling, eating and drinking is lots of fun and although it’s a bit of a cliché, I love spending time with friends and family at this time of year.

However, all the calories add up and although for the rest of the year the running keeps everything in check, in December it requires a more focussed approach and so I elected to run more and often as well as do a couple of Joe Wicks HIITS (minus the mountain climbers). My running has been a bit hap hazard since the Bristol half marathon and although I have run at least once, usually (but not always) twice a week, this seemed like a good opportunity to re-discover my running “mojo” as well as mix my routine up a bit.

I have signed up for a Sprint triathlon in May next year (400m swim, 24k cycle and a 5k run) and so I need to incorporate some swimming and cycling into my training. I’ve been running now for nearly 2 years and as regular readers will know, I have a complicated relationship with it. I love and loathe it in equal measure and after training for the Bristol half marathon and undertaking a weekly “long” run, I did feel as though I was in danger of becoming bored with it. This was part of my rationale with signing up for a triathlon – it would give me different things to focus on in addition to the running. I’ve also been assured by Merida over a glass or 3 of prosecco, that cycling and swimming will help build general overall fitness and these sports are the natural companions to running. They will also help with the running and make me a better runner? Time will tell.

Not many people know this, but I LOVE swimming and also in a surprising twist to the story, I’m NOT terrible at it. I find it peaceful and I am quite at home in the water. I can swim 400m breaststroke in just under 13 minutes and although I have been assured that this would be a respectable time for the triathlon (and importantly I won’t embarrass myself), it also won’t surprise you to learn that I’m going to learn how to front crawl as it will apparently save my legs, according to Swim Dad. Why take the easy road when there is always a more complicated one to explore as is my motto?! But ultimately, as always, I want to do the best I can and so swimming front crawl is necessary.

2 days before Christmas Eve, I took my daughters to the local swimming baths in an effort to burn off some pre-Christmas excitement. I went with the expectation that I would swim lengths and my girls would “play”, but I was wrong. My daughters spent 30 minutes coaching me and my haphazard front crawl. They sat either end of the swimming pool and explained what I should do in order to achieve good front crawl technique and I practiced swimming between them. They also swam and showed me too. The lifeguard seemed a bit confused and came over to ask what was going on and when I explained, he told me they were doing a good job as my “shark fin” had improved – er ok then?! I felt very proud of my girls and grateful. I managed 250m of front crawl (needing short breathers in between each length) and I was delighted. I’ll be adding this to my list of things to work on for 2018. 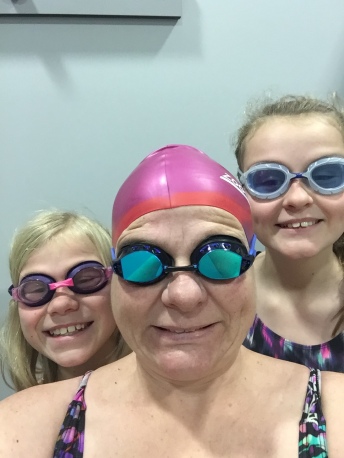 But back to the running. I’ve run much more in December than I did in October or November as I have battled to still be able to fit into my Christmas Party dress.

These have included a very enjoyable Harbour Loop with Curly Sue and the LA Blond before we had lunch at a vegetarian restaurant (I’d never eaten in a vegetarian restaurant before – big thumbs up from me) and a This Mum Runs Christmas extravaganza that was planned as a usual Wednesday night run, running down the Bath Road in the rain and freezing cold that saw me hurdle a rat as it ran across the path in front of me (I didn’t know that I could jump that high!) that ended in the pub. I think more people might give running a try if there was a pub at the end of each effort. It would have definitely helped me in the early stages of couch to 5k! I can just hear the woman on the app saying, “well done on completing week 3, now get to the pub and drink a pint of lager…you’ve earnt it”.

However, the highlight of December running calendar (especially in the This Mum Runs annual calendar) is the Weston Super Mare Christmas Cracker. This is a 10k that takes place largely on the beach in Weston. It also happens in fancy dress…..now as a general rule, I am not a fan of fancy dress. In truth I despise it and yet I was doing a good impression of someone who was excited at the prospect of running 6 miles in the sand, dressed as a mouse. (TMR had entered the Group Fancy dress competition under the theme of “Cinderella the Panto” with Merida running as Cinderella, our Captain running as an Ugly Sister and Hattie and I running as mice which would become footmen. We won first prize which was exciting as I don’t usually come first at anything when I run in a race!) It was a very tough run as the sand was unforgiving and it was also very cold, but we giggled and sang carols on the way round. Hattie and I were accompanied by another lady on the run and we were privileged to run with her on her first ever 10k. She did brilliantly and I am sure that she will do more and I also know that she has signed up for the Bristol half marathon next year. She is a runner (even though she doesn’t believe me when I tell her that she is).

Today I ran my last 10k and got my final medal of the year at Westonbirt House. Husband was also competing and I ran with Curly Sue, who is back in full “coach mode” having agreed to train Hattie and I as we work towards the London Landmarks half marathon at the end of March. We survived the Bristol Half but now we want to improve.  The Westonbirt 10k was excellent. I’ve been struggling with a sore throat and chesty cough. I lost my voice for a couple of days this week and my asthma has been tricky so I knew that I wouldn’t get the time I wanted, but did work hard and enjoyed it, well I mostly enjoyed it, as with most runs. My final kilometre was the second fastest of the whole run and very fast for me, which shows me that I can push myself. Curly Sue is going to help me work on this over the next couple of months.

After existing on a diet of cheese and pringles over the last week or so, (what can you do? It’s Christmas after all!) I have elected to really sort my diet out over the next couple of months. If I am to improve as a runner, which I want to do, then I know I will need to try and lose some weight. This means I will need to pay more attention to what I eat. I’m not dieting and you know my feelings on them (they suck) but I’m going to try to eat better in order to build muscle and hopefully shed some fat.  Running is hard, but if you’re heavy, it’s harder and tougher on your joints, so I’m going to try and weigh less. The challenge with this is that long runs make me very hungry indeed so planning will be key. I am sure I will talk about this more as the weeks progress.

Next Wednesday it will be 2 years since I went on my first ever run. So much has changed in my life and so much if this is because I am now a runner. This word no longer scares me. I am a runner.

Next year, I have 1 half marathon in the diary already and I know Hattie and I will do another in the Autumn (we can’t quite decide which one yet) and there will be 10ks, probably quite a few. But also next year there will be a sprint triathlon, swimming (lots of swimming) as well as cycling. This will bring brand new challenges and although these challenges scare me enormously, I am also very excited about them. Being scared is no reason not to give things a go. Imagine if the fear had stopped me downloading that app 2 years ago – where would I be now? What would I look like? What state would my heart be in? But most importantly, I would never have met all my wonderful running friends and let me tell you, running friends are the BEST. If you’re already a runner, keep going – you are doing an awesome job. If you’re not……..come and join our gang. You won’t regret it I promise. I haven’t.

Happy New Year to you.