Hmmm. It’s February. How on earth has that happened?

January, although for many is a long and gloomy month, for me is one of my favourites. For one thing, as much as I’m fed up with my busy, exhausting job by the beginning of December (I’m usually a bit burnt out by the end of the year truth be told) by the time January rolls around, I’ve usually had a bit of a rest and feeling ready for action again. I do love my job which is lucky when I also run my own business.

January is also both my and Youngest Daughter’s birthday month. There’s a lot of cake and celebrations in our house in January and this is always good.

January also marked the beginnings of “Half Marathon” training month again and for the first week of January, there was very much a “getting back to it” vibe for me.  As before, Hattie and I made a plan which had all of our long runs together – plotted out. As I am desperate to crack 3 hours for the London Landmarks, I suggested to Hattie that we engage a proper running coach to supervise one of our scheduled 3 sessions a week and that this session should be fartleks (I still snigger when I type that) or as they also known, the dreaded interval sprints. As for who we should engage to manage this, it was an absolute no brainer……enter Curly Sue, or Coach Curly Sue as she is now to be known.

So far we have had 3 coached sessions and I am already seeing improvements in my running and technique as I took 90 seconds off my previous best time at Ashton Court Park Run earlier this month. Queen’s Square in Bristol, *may well have been* designed by a runner wanting to improve his/her fitness and stamina for an upcoming race. (*pretty sure it wasn’t though*).  It is also very convenient for a lunchtime run. Over 3 sessions so far, we have walked, sprinted, tempo ran (this is a new one for me, it’s where you run faster than your usual pace, but not at a full sprint) and ran with raised knees, low shoulders (this is hard for me as my boobs bounce around like a couple of tiggers trying to escape 100 Acre Wood) and engaging your core. This is a lot to think about whilst trying to breathe, and it’s hard. This is why Coach supervises these sessions as when something is hard, it’s easier to bunk off or skip the session. This can’t happen now and both Hattie and I are delighted. These sessions will continue right up until the Half Marathon and maybe even beyond. 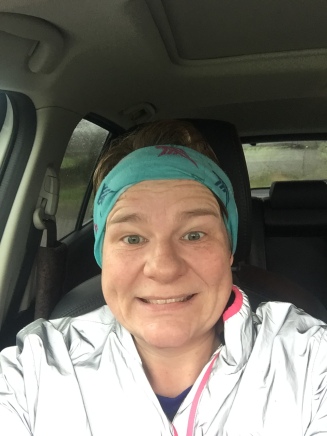 At the beginning of the month I decided to ramp up everything as I also have a sprint triathlon to train for. So on top of 3 runs a week (one of which is a This Mum Runs Wednesday night run when we had 18 turn up on one week earlier in the month), I decided I should integrate a spin class (to cover the cycling element) into my training plan as a well as a swim. As I mentioned in my last blog post, I have been perservering with my front crawl and I’m pleased to say that now I can now swim front crawl for 400m in one go. It’s exhausting but I can do it. Eldest daughter often accompanies me to the pool on a Friday evening and we’ve managed to go 3 out of the last 4 weeks and so it’s slowly becoming a habit. One the other week, I was unable to swim, go roller blading or ride a bike and I suspect 3 out of 4 weeks will be the normal cycle for swimming training going forward.

Under the support and encouragement of some of the “Uber Tri Mums” I am going to attend a trial session with North Bristol Triathlon Club next week. Honestly, I can’t believe that I just typed that! Now as much as I doubt I will ever feel able to run with them (but never say never), swim coaching and learning the rules of triathlon are all things I need. Plus, I am reliably informed by Merida, that they are all really lovely people and there is nothing to worry about. 2 years ago, I wouldn’t have believed this, but now knowing how lovely and encouraging sporting communities really are, I suspect (and hope) that they will be supportive as I try and learn their sport. I’m going for a swim coaching session next Thursday and I will report back afterwards.

Unfortunately, all of the extra cycling and sprinting impacted my right leg and something went “ping” 2 weeks ago and I had to see a physio. As usual, tight quads were diagnosed and I was told I was doing too much, needed to stretch more and probably needed to drop a cardio session in favour of weights. I was only out of action for a week and so have decided to put spin on hold until after the half marathon as I can’t really afford drop a run with that 13.1 miles closing in with every day. I only have so many hours I can dedicate to training and although in December my job is usually quiet, in January it is bonkers busy. This is one of the reasons why I didn’t manage to write a blog post. So I will continue swimming but spin and cycling will be left alone until the end of March.

At the end of December I was contacted by TMR HQ and asked if I would assist them with an empowerment campaign aimed at women who find it difficult to exercise for fear of judgement. I jumped at the chance as this is something I really believe in, having rambled on in this blog for more than 2 years now about the mental challenge about calling myself a “runner” when I’m so slow etc, I felt like it was designed for me. The Captain asked if I would attend and be filmed reciting a poem and recorded doing so and that it would be a proper video, with a director and camera crew. A couple of weeks later, they said the results were good, but they needed footage of me running to complete it. I am not going to lie, being filmed running (in lycra) was not mentioned at the beginning and possibly may have influenced my decision whether to participate or not, but I was in too deep now and so on Sunday 7 in January at 8am, I was running around a Bristol park, in the snow, being filmed. It was absolutely freezing but the Director and Cameraman were brilliant. A few days later the results were posted and dare I say it, I am quite proud of them. Hopefully, as this blog shows, you do not need to look like Paula Radcliffe to be a runner and that we all come in shapes and sizes. Here is a link to the video

I have been told that the video has been viewed 103,000 times which absolutely terrifies and thrills me in equal measure. If it convinces one person to give running a try then that morning running in -2c will have been worth it.

On Friday evening last week, I was asked to speak at a Charity Scouts fundraising event called “RunFest”. As I sat listening to the lady who had run at least 5k a day since the 1970s, and the gentleman who trained Kenyan Athletes, the Ultra runner and many, many other amazing people, I did wonder what I was doing there?….but I went ahead all the same to tell my running story and really enjoyed the experience. I was asked afterwards if I had considered a career in “stand-up” as my stories were funny….but no, this really is my life!!  I also sold quite a few more books and raised some more money for MacMillan Cancer so it was all extremely worthwhile. I might have also agreed to do a 30 mile Ultra run (which I’m assured is a bit of running, a lot of walking and this will be fuelled by cake)..and so I’m sure there will be more on this as the year progresses.

Every penny of profit is being donated to Macmillan Cancer and so far we have raised £622 which I am absolutely delighted with. Thank you to everyone who has bought one.

Yesterday, I ran the London Winter 10k which was organised by Cancer Research UK. This was a 10k around the City of London and I ran it with my long time best mate Blanche. Blanche and I have enjoyed many weekends away over the years, but they have usually involved drinking and dancing so this was a new and unknown kind of weekend for us. It was the first time that Blanche had run more than 5.5k ever in one go and she was AMAZING, smashing 10k and amassing PBs throughout the run. I hope this will be a new thing that we can do together now. My google history this morning is a list of “10k races in….Barcelona/Paris/Amsterdam/Milan/New York/LasVegas” etc because after all, it is all about balance. I think I might have that phrase engraved on my headstone when the time comes. We celebrated in style yesterday afternoon with a pint of lager (with the TMR Captain and Mrs Womble, who is a TMR London Runner whom I have chatted with quite a bit on line and it was lovely to finally meet her) gin and tonic (obviously), crisps and then a meal out with red wine. It was brilliant. I thoroughly enjoyed the weekend and neither one of us would have ever predicted even 3 years ago that we would ever have had a weekend away together that would include a 10k race.

Before I finish I just want to give a little shout-out of support to my training partner Hattie, who is managing some very sad family stuff at the moment that is impacting every aspect of her life. Life can throw some horrid stuff at us sometimes for no reason at all but I hope that the running is helping with the headspace. I miss running with you and I’m sending love to your whole family.

Into February, I will try and blog a bit more regularly, not least because it helps focus my mind for training and the London Landmarks half marathon is really creeping up now. Time to properly get down to work and be a #runnerfullstop.